When it comes to mobile ministry it seems that we're never satisfied to leave it to just talking in millions or tens of millions- the numbers typically come out in hundreds of millions or billions.  The number of people with mobile phones, phones with this or that capability, etc,  Honestly, I've gotten almost numb throwing numbers in the billions around.  That is, until I saw a chart yesterday that me realize, once more, what a rapidly changing world we live in and how important it is that we leverage this technology that the Lord has provided for us for such a time as this, when the number of billions of the unreached dying apart from Christ have never been higher. 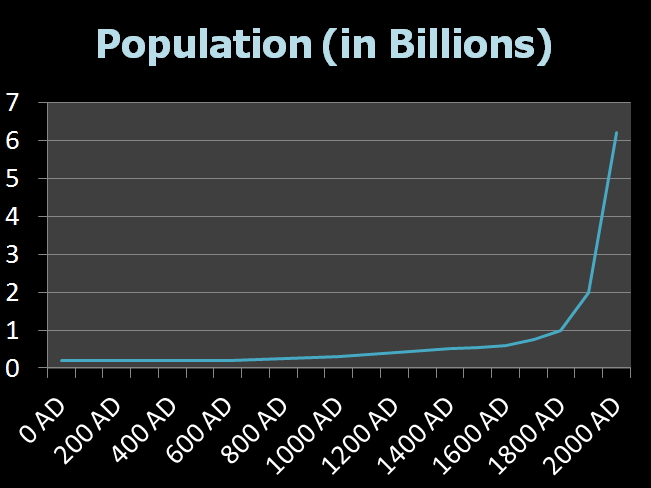 We passed the milestone of one billion people on the planet just over 200 years ago, in 1804.  We doubled that to two billion in 1923.  In less than 90 years we added five billion souls to the human population to more than triple the the number of people that were on the face of theplanet in 1923!!

God has done wonderful things drawing people from many unreached tribes and nations to himself in those 90 years.  The percentage ofpeoples who have no chance of hearing the Gospel has actually decreased in these last 90 years.  At the same time, though, the sheer number of people who are dying never having had an opportunity to hear the Gospel and be discipled in faith has NEVER EVER been higher.  We're talking hundreds of millions and billions here people!