In my pursuit of the ideal suite of tools for filmmaking on mobile devices, I had to test out the editing apps. The idea of filming and editing and delivering a complete video program or short film without ever leaving your iPhone or iPad intrigues me. The camera apps I have reviewed in the past convince me that you can shoot something that is ‘professional grade.’ But what about editing? Here’s what I found from my tests with several of the most popular iPad and iPhone editing apps. 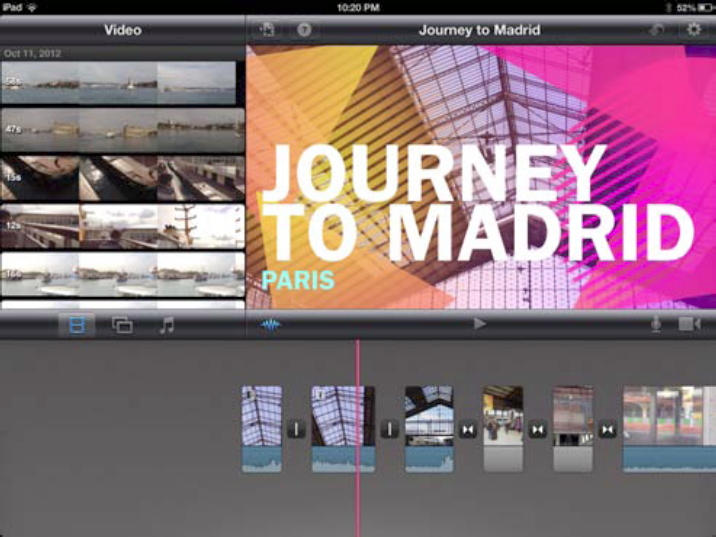 iMovie follows the philosophy of many Apple apps aimed at consumers who want an easy way to create something fun and polished with little effort. In this iMovie succeeds, I think. It is  easy and fast to create short videos for vacations, special occasions, and other life events and to make them look polished with music, nice title treatments, and effects.

iMovie pulls video clips and still images from your Camera Roll. Importing from a camera via a connection kit is simple if you don't shoot with the iPad. (That's   still too weird for me!) Drag and drop clips, trim them by touch, and add titles and music from your iTunes library. It really is quick and easy.

However, if you are looking for a tool that gives you more custom control, iMovie will likely disappoint. Certainly as a ‘professional’ editing tool on the iPad it falls short. This is because (Apple-like) it always wants to think for you.

An example is iMovie’s dependence on Themes. There are a number of nice themes included with the app (8 in the version reviewed) and they help to make a quick, polished presentation. You can choose themes like ‘travel’, ‘news’, etc. The screen shot shows a pre-built title treatment - simple and nice-looking. However, if you want to just edit video and add some simple titles, you are out of luck. An example of Apple’s tendency to know what’s best - some themes include a ‘location’ tag that is part of the title. Heaven-forbid you should want to not put the location under the title. You are out of luck if you try to enter nothing. It’s there, no matter what you desire.

That being said, iMovie’s media management is simple and effective and it’s a breeze to edit. The interface is easy to understand and there are not a lot of submenus and hidden options to mess with. It is very quick and easy to string together some clips for a quick video, add a title and some music, and deliver it in a number of formats. You can also record audio or video within the app using the built-in camera and mic or external mic.

iMovie provides basic exporting functions to common video sharing sites and to the Camera Roll on the device for transfer to other devices. It's simple and the output is of good quality. 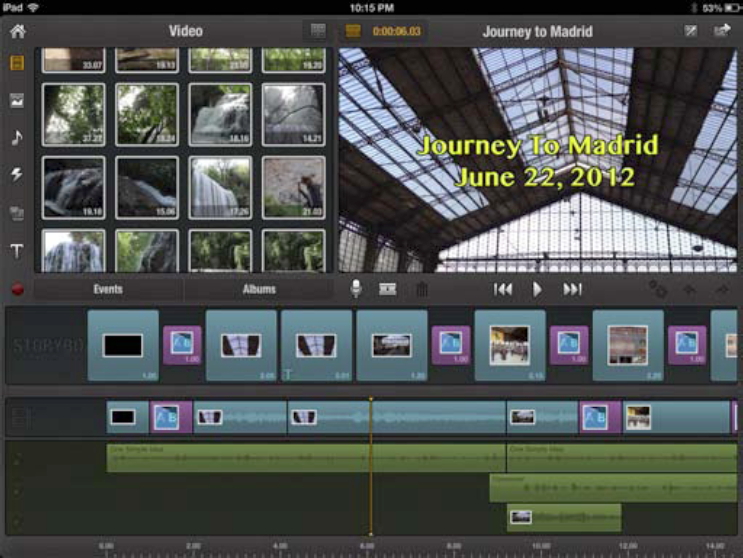 Pinnacle Studio was the first editing app I tried when I upgraded to the new iPad. I had used both iMovie and 1st Video on the iPhone 4S and was eager to see the differences. Pinnacle proved to be very intuitive for me and I put together a short video very quickly. I like how it makes use of the screen real estate and feels much like a ‘normal’ desktop editing app, with a view window and timeline. (It also works in portrait mode if you like.)

Importing video was very quick. I did not have any raw footage on my iPad when I began so I connected by iPhone via the camera connection kit and grabbed a few scenes. Pinnacle studio recognized the files in my library and I was able to bring them into my project without a problem. There is no transcoding.

I wanted to test the basic features and workflow, so I made a quick video of a train ride my family took in Europe this summer. I used a couple of still images, some video clips shot with various iPhone cameras, and I also recorded voiceover narration using the in-app recording function. I found the app to be very responsive and intuitive. It really is a joy to edit on a touch screen when things work so smoothly and you are just cutting - not bothering with all of the nitpicky stuff you can do in a professional desktop app.

The app has plenty of usable transitions and title capability, including some animated title templates that work well. I also like the ability to pan-zoom still images with customizable keyframes (the so-called Ken Burns effect.) However, there are little tricks that you need to read or dig a bit to find. For instance, if you want to separate audio from a video clip, you can triple-click the clip and the audio is sent to a new track. This is very nice because audio mixing in these apps is often a weak point and there is no A-B track arrangement for things like split edits. There is also no ‘rubber-banding’ for audio levels in Pinnacle Studio, so you have to be able to think about the audio without seeing levels displayed visually. If they add just simple audio mixing of this kind, you could really do something with this app!

Uploading and exporting to various social media sites and media file types is supported, but somewhat limited, of course. The quality of 'master' files is excellent and the workflow is simple. One feature I have not been able to test is the export to Pinnacle Studio for PC. I have used the desktop app in some beginning filmmaking workshops and have found it to be a decent entry-level app for PC users. It could be nice to do basic assembly on the iPad and then finesse the cut on a laptop or desktop system. 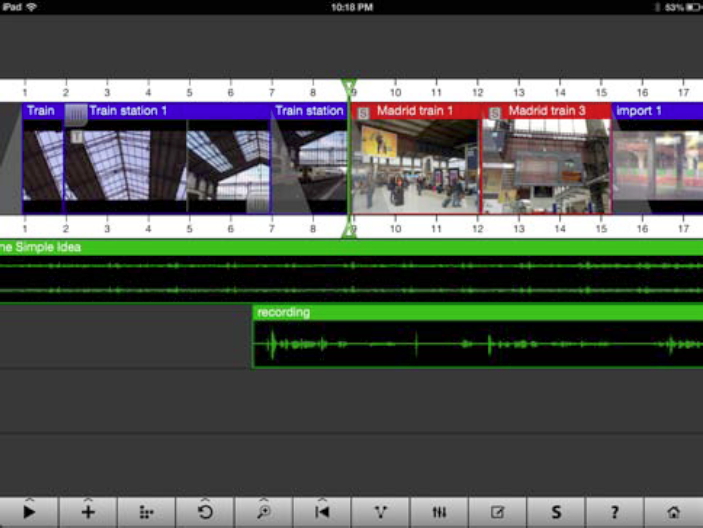 I have been impressed with the capabilities of 1st Video on my iPhone. It is the only app I’ve found for iOS that gives some more professional control over things like audio levels. I found the interface and workflow pretty non-intuitive, but once I learned its tricks, it can do some cool things.

The workflow for 1st Video is very different from the other apps. To begin a project, you must create a library of clips that are associated with it. It is a simple process, but more time-consuming than simply using the existing OS libraries of music, photos, and videos directly. In 1st Video, you create a library by selecting clips and giving them a name that is used to label subsequent clips that you import. Then the app transcodes the clips. This step does add time and the transcoded clips take up space in you devices storage. They seem to be stored in a hidden application folder so you can’t access them from anywhere but the app. (A handy desktop app called “iExplorer” lets you see these hidden folders, but be careful what you mess with!)

You begin a video project by bringing the transcoded and named clips into a project. You can trim clips at this stage and they first go into a form of storyboard. In the timeline view, 1st Video makes full use of the screen for different timelines. There is no dedicated viewer window, but when you play the timeline, a larger window opens to show the program. You can also choose a full screen view. A row of buttons along the bottom of the screen give you contextual commands and allow you to switch edit modes, including calling up audio level editing.

This is an app for which it pays to read the user guide! You’ll never figure out transitions and titles unless you stumble on 1st Video’s unique two-finger access to clip settings. It’s pretty cool once you figure it out, but there are several clip modes and you gotta be in the right one to get to things like fade-ins/outs and titles. Most other apps rely on more familiar buttons for titles, transitions, etc. I do find it to work just fine and I imagine that some users will really fall in love with it. That’s just how UI design works; it can be love it or hate it.

Audio; I do like 1st Video’s ability to ‘rubber-band’ audio in clips. The other apps force you to split clips and wrestle a lot more if you are mixing audio to duck it under voice overs and such. In this, 1st Video works more like a desktop app.

Titling works through the two-finger-tap on a selected clip in the timeline. There are some presets but not a lot of options for movement or font tweaking. It’s fine for standard titles but I think the titler is one of the unstable parts of the app. (see below)

The bottom-line for me on 1st Video is that I think they need to work on it some more.

I had many problems with the app crashing once I did much more than string a few clips together. Fortunately, it has a great auto-recovery feature that meant I never lost any work. Vericorder tech support has some recommended procedures to follow if you have crashing issues, but they are more complicated than a typical use will want to attempt. In my particular case, I determined that my main crashing problem had to do with a single video file. I deleted the  transcoded clip and went through the importing process again and things were more stable.

Feature-for-feature, and for ease of use, Pinnacle Studio does everything I need a program to do for many kinds of short videos. I would not want to do anything complex, of course. But you can do much more than simply string clips together and add a song. 1st Video is also a strong editor, but a little more difficult to use at first. It doesn’t have nice still image tools like pans and zooms, but it is much more flexible than iMovie. The best feature of 1st Video for me is the audio mixing via rubber-banding so I have a visual reference. The app is aimed primarily at journalists, so perhaps the lack of fluff in effects is justified. I think I could cut a short dramatic film together with either Pinnacle Studio or 1st Video and have a lot of fun. That’s a challenge for my next long-distance plane or train ride.